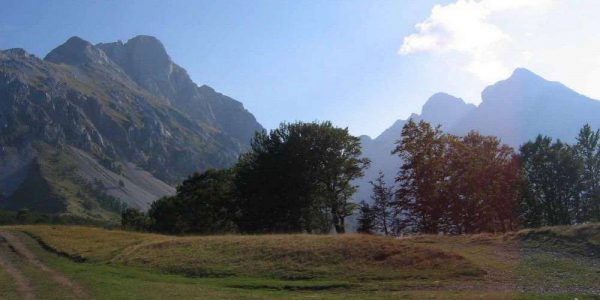 In addition to well-known paths leading to three main and most attractive tops of Komovi (Vasojevićki (2461 m), Kučki (2487 m) i Ljevorečki (2463 m)), there are many other hiking trails, which are also exciting and beautiful, but less known, or almost completely unknown to both hikers and tourists. One of such trails is a round trail around Komovi.

The trail around Komovi has a backstory which does not include today’s hiking-recreation, as it used to be a kind of a shepherd transversal from the past. Back when cattle breeding was a dominant way of life in our villages, and when there was an intensive life in katuns – this trail used to connect Montenegrin tribes: Kuči, Bratonožići, and Vasojevići, and their numerous katuns on beautiful plateaus of Komovi.

The trail starts from Štavna (1720 m), but it is possible to start from Popović katun (Carine, 1870 m), Pričelje, or Ljubani, in any direction. However, having in mind accommodation, Štavna is the most convenient option.

Next to Janko’s Water, the path from Štavna goes down to the Ljubaštica Valley, which was created by melting of the large glacier from ice shelf Međukomlje. From the river bed, there is an ascent through thick woods up to grassy Ljuban and its katuns. At Ljubljan, at location Bjelaga, you pass next to puzzling old marble, resisting the time, and intriguing passers-by and tourists. They serve as a reminder of a tragic event from the past, when a kind of anarchy was present in this region, and when bandits used to rob shepherds of their cattle. According to the legend, two shepherds whose bones stayed at Ljuban forever were avenged during next robbery by the same bandits from Morača.

From Ljuban, the path continues towards Rogam Plateau, on the west side of Ljevorečki and Kučki Kom, next to the spring of Crnja, and best spring of drinking water on Komovi – Black Springs (Crni Izvori). This is an extremely beautiful and attractive part with a fantastic view of surrounding cliffs around the two Kom’s tops.  From Black Springs, an ascent follows, under Rogam Top and the beginning of Rogam Plateau (2113 m), which spreads up north and represents a very attractive hiking part to Bare Kraljske. Very soon, you get to a passage – Ćafu od Pričelja (2105 m), and from there, you can conquer Rogam Top (2303 m) and Suvovrh (2211 m). From this passage, a beautiful view spreads across Rogam, and Pričelje Katun (1810). This is also where the second part of the route begins.

From the passage, we get down to Popović Katun (1860m) very fast. It used to be one of the largest katuns on Carine, and it is now full of structures in which cattle was kept. Marko Miljanov, a famous Montenegrin duke, used to have cattle here. In the katun itself, one of the structures previously used for cattle, was converted into an alpine home of an open type, in which a passer-by can spend the night or find a shelter in bad weather. There is a spring nearby.

From Carine, we keep on going on the east slopes of Vasojevićki Kom, through Borovi Pod to Varde Hill, where Vasojevići guardhouses used to stand, and underneath, there is a katun which was home to cattlemen from Japan Village. In this part of the tour, we pass through the wilderness, and for a good amount of time, there is a view of magnificent bordering mountains, and wild valley of Mojanska River.

From Varde (1727 m) follows ending, easy part of the path through beech forest, and there are multiple springs. After this day-long adventure, we reach Štavna, where we can relax in the summer eve at Štavna Eco Katun, enjoying the divine Montenegrin cuisine.