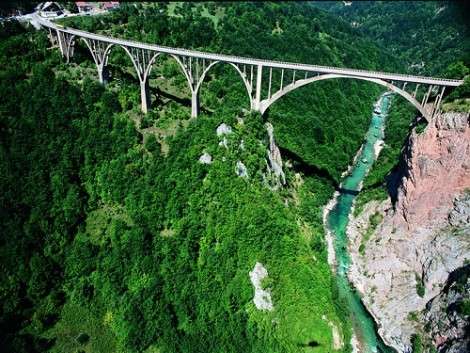 On its way from Komovi, which is 145 kilometers long, Tara River has created a canyon, which is almost one hundred meters long and 1.3 kilometers deep. Tara Canyon is second deepest in the world (right after Colorado Grand Canyon), but judging by its beauty, it would surely be in the first place because of its crystal clear water (drinkable throughout the flow) and vast variety of flora and fauna, whereas most of said species are endemic. Tara River is protected as UNESCO World Heritage Site. The Canyon and River have fulfilled three conditions (only one of which was enough) in order to become part of UNESCO: geological, hydrological, and biological phenomenon.

Tara “The Tear of Europe”, graded by 3-5 degrees on the rafting scale, is one of the most attractive rivers in the world, and is true heaven for everyone fond of adventure. White water rafting on Tara River is the best in Europe and world. It is a truly active vacation, which provides its participants with enjoyment in its waterfalls, river rapids, glades, mills, old church places, and monasteries, bridges, and rocks. In this canyon one can encounter breathtaking phenomena.