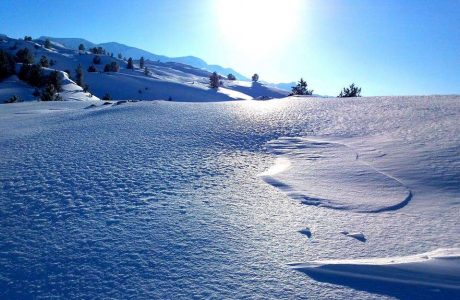 According to the surface area it covers, Sinjajevina is the largest and most widespread mountain in Montenegro. It is the extension of Durmitor Plateau and it spreads from Žabljak on the southeast, bordered by Tara River Canyon on the northeast, and Morača River Canyon on the southwest. With two of the largest and most imposing Montenegrin canyons, it spreads up to hollows of Kolašin and Mojkovac on the opposing side. On the northwest sides are canyons Tušinje and Bukovice, which border it on that side.

In addition to rivers Tara and Morača, Sinjajevina is surrounded with mountains: Durmitor on the northwest, Ljubišnja on the north, Bjelasica on east-southeast, Morača Mountains and Maganik on the southwest.

Sinjajevina is 40 km long and 15 km wide and it spreads in the direction of northwest-southeast. Sinjajevina rocks on the southwest dominate above Morača Canyon, whereas on the other side, northeast rocks of this range fall down into a wonderful long valley of Lipovo. It is assumed that rivers used to flow over the surface of Sinjajevina, which is notable from a large number of dry valleys, the way the spread across, and their diversity.