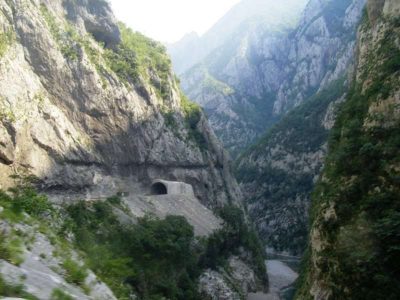 Morača River Canyon is the second largest river canyon in Montenegro, with steep river banks. It is located in the middle part of the flow right, in front of its exit to Zeta Plain, at the territory of municipalities of Podgorica and Kolašin. It looks as if it is consisted of two parts, the plain one, flowing into Lake Skadar at the territory of Podgorica, and the mountain one, beginning in the northern part of Montenegro, by the Rzača Mountain. At the mountain part of its flow, the river cut the canyon through rocks. The canyon is up to 1000 meters high and characterized by steep watersides.

Morača River is more than 100 kilometers long, whereas only 30 kilometers run through the mountain part in the middle part of the river which it is cutting the gorge consisted of vertical rocks. The deepest part of the canyon is called Tisov Vrh and it is around 1000 meters deep.