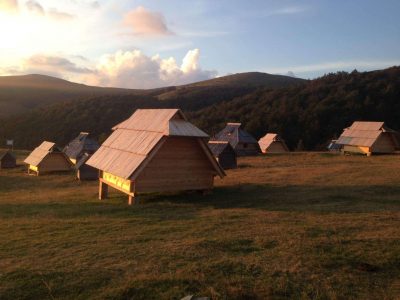 Vranjak Eco Katun (katun is a small mountain village made of huts inhabited by shepherds in the summer) is located on Bjelasica at 1800 m a.s.l., and judging by many people’s opinion, this place looks like a magical village inhabited with different and special people, where time stopped and remained in some better, nicer and simpler period. Eco katun was made based on tradition and lives of Montenegrin hillbillies from previous centuries up to present times. They produce exclusively organic food on their farm in eco katun and it is served to the tourists. You can rent mountain horses here and ride to nearby tops of the national park, witness wool-weaving the old-fashioned way, listen to gusle (traditional Montenegrin instrument), or play a mountain match of five-a-side football on the plateau under the katun. If you can’t ride, you can take part in a riding school, and if you don’t want that, there will be bikes at your disposal. There are endless opportunities for hiking on tops and slopes of Bjelasica and national park which borders with this katun. There is also a possibility to participate in village activities, such as collecting and chopping wood, milking cows, making Kolašin cheese and cream, making national cuisine specialties, etc. Tourists have 70 beds in unusual cottages. Some were bigger, with seven beds, whereas the smaller ones are more interesting and sled-shaped, with two beds. Solar energy provides with lighting for the entire katun. In the katun, a special place is held by national cuisine with authentic mountain menu of Montenegro.